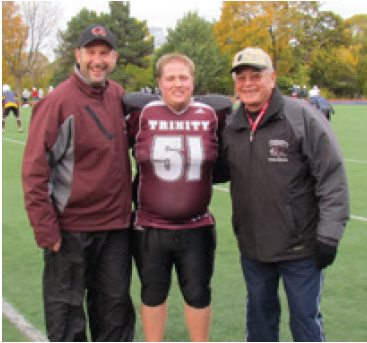 Brad Angevaare started playing football at age seven in the Kinsmen Minor Football League (KMFL), and boy, is he glad he did.
Friends of Brad’s family suggested he sign up for the KMFL, but Brad was not so sure. On the last day of registration, Brad finally decided to sign up. He played for two years in the KMFL, played for Holy Cross from grades 9 through 12, and then he moved on to Trinity College for grade 12 and 13, mostly as an offensive lineman. Holy Cross won the Central Ontario Secondary School
Association championship, but the team competed in no other championships after that. Brad said that they “had some good teams but just couldn’t win the big games.”
During those years he was most influenced by two coaches. Bond Bjorgan was intense but not mean and had a great attitude towards the players and the game. Bev Quinlan, his grade 9/10 coach, loved the game and was a great coach to have to start his high school career.
During the summers of 2011 and 2012, Brad played for the Oshawa Hawkeyes of the Ontario Football Conference. It was a great experience. Coach Brad Chalmers, whose style was “my way or the highway”, was somewhat intimidating at first, but once you understood his style and got used to his coaching technique, he was an amazing coach. Chalmers, who owns Elite Performance Centre in Oshawa, was also Angevaare’s first strength coach, and was crucial to his development. Then, the Peterborough Wolverines started up right in Brad’s own backyard. This meant a lot less travel, but it was an all new program and a new team. Brad played the 2013 and 2014 seasons with them, and the team accomplished 5–4 and 3–5 records. He learned that, “hard work is essential,” and “to work together as a team is a key to success”. Trust was their key word; everyone from the quarterback out had to trust that each other player was going to their job.
During the 2013 season with the Wolverines, he was approached by the Head Coach of Trinity College, a private school in Port Hope, about attending the college for the 2013-14 season. Brad was impressed by the fact that the coach was
Adam Rita, a professional coach for many years in the Canadian Football League. Private schools are not cheap, but funding was available, and the decision to go was made as a family. His family has always been supportive of his football career, and his parents, Rob and Connie, and his sister
Meghan, have travelled to many if not all of his games. They decided that they would make it work, especially Connie,who didn’t want Brad to miss out on this great opportunity. Brad calls Trinity the best experience of his high school career, especially because of Coach Rita’s unbelievable knowledge that he was able to share with each player. He knew how to understand each individual and coach them individually, too. He was always happy, telling players to remember that football is a game, and he made sure all were having fun.
At Trinity, Brad improved on his marks, and a few universities contacted him, but he narrowed his decision down to two: McMaster University and Ottawa University. After visiting the campus in Ottawa and meeting head coach Jamie Barresi, his decision was made. It was a nice campus, close to home, and Barresi seemed like a great guy and coach. Brad is taking Mechanical Engineering, and he realizes he will be busy, but he is up for the challenge. Brad looks forward to meeting new friends and getting his degree. He has no big plans for pro football since he feels he is too small for the position he plays.

The biggest thing that stood out for him during his playing career of football is, “...the true team concept, need everyone to do their job, trust is huge, playing for everyone else, not really all about the stats.”
Good luck, Brad Angevaare, at the University of Ottawa both in your football and academic career. I am sure you will make your family and Peterborough proud.

3 Things You Need for the Best Superbowl Experience