How to escape a Great White Shark 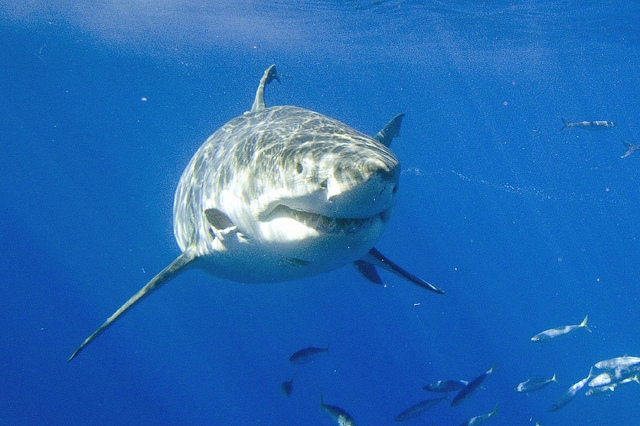 Andy Casangrande, an Emmy award winning professional cameraman and shark expert offered this insight when interviewed by Entertainment Weekly---on what to do if a great white comes swimming at you with its jaws wide open.
The best thing that I've found to do sounds counterintuitive, but you swim right at them. You always keep eye contact, and you swim directly at the shark, and that seems to trigger a defense mechanism. Now they're like, wait a second, everything in the ocean swims away from me aside from orcas, which are known to occasionally kill white sharks. Everyone says punch a shark in the nose: the problem with that is that water refracts and magnifies things, so if you go to punch a shark in the nose and you think its nose is right here, it's not, it's back here, and as you follow through, your hand goes straight into its mouth. Their eyes and their gills are the most sensitive things. But the reality is, if you don't act like prey, they won't treat you like prey. You don't want to swim away while they're watching you. As they swim away, you swim away, and try to get back on the boat, open up a Red Bull, say, 'Oh, that was fun,' and downplay it.
For more of Andy’s thoughts on sharks, go to http://insidetv.ew.com/2012/08/16/shark-week-cameramen-tales/