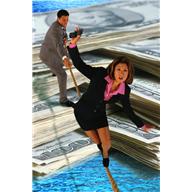 From Emily Davidson to Margaret Thatcher, Emmeline Pankhurst to Hilary Clinton, women have done much to further their cause over the last century, but some would argue it's still very much a man's world out there.

So what does it take for a member of the fairer sex to make it in a traditionally male environment? How can girls smash through that infamous glass ceiling?

Vicky Kenny, a successful female electrician offers these top tips to fight the stereotypes and reach the top:

"When I started at college I was the only girl in a class full of guys, and it was easy to feel intimidated. But I held my head high, and walked with confidence, and it made all the difference."

" People often assume I'm gay or a feminist...I'm not I'm just an ordinary girl who loves my job and wants to earn money. If I wasn't an electrician I would be a nail technician, I love having my hair and nails done, and hate the ugly boots I wear to work. But I wear exactly the same uniform as the men, and keep my nails short to prove I'm just the same as them, and I can do my job just as well."

"I've had people turn me away from jobs purely because I'm a woman and they think that means I can't do the job. But I've also had people approach me on the street and tell me what a positive role model I am. No matter who you are, or what you do there will always be people who don't like you, sometimes you just have to accept that and carry on."

"It's a complete myth that women are bitchier than men; in my experience men are so much worse! The trick is not to try too hard, but don't be confrontational either. Let them come to you, but when they do be receptive. Don't expect miracles overnight, but they will eventually come around to the idea of a having a girl in their ranks."

"There are times when it's been really hard, and felt like a constant struggle. But end goal is completely worth it. I can be my own boss, I earn my own money, and I've got a skill that noone can take away from me. Just keep the end goal in sight and remember what you're aiming for."