In The Kitchen: Separate Your Potatoes and Onions in Storage 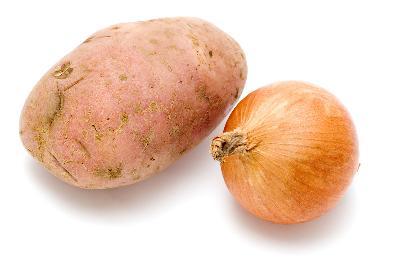 Did you know that the Bayer Corporation (the same guys that make all that aspirin) made poison gas that was used against prisoners during World War 2? Well they aren't the only unlikely culprit guilty of creating poisonous gasses. You will also get a sickening concoction from the combination of potatoes and onions!

It turns out, onions emit some sort of...well... emission. Or gas. And that emission reacts with potatoes in such a way that they will rapidly deteriorate. Read more about it at the link provided. It's crazy stuff.

Potatoes themselves can end up being poisonous to people, so if you see them sprouting it's a sure sign to throw them away. Like I always say, "If you see the sprout, throw them out!" (I have never said this).

Also, make sure you're storing all of your produce, including your Walla Walla Sweet onions and that sack of Idaho Golds in a dry, cool place. The pantry is ideal. Granted it's dry and cool.

What ovens do bakeries use?