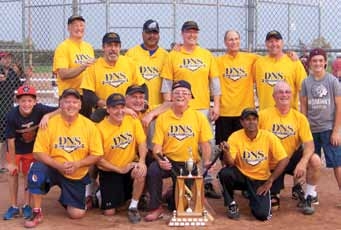 Story and photo submitted by Todd Bondy
We are a collection of men from all walks of life. We’re made up of teachers, salesmen, environmental workers, chefs, electricians, radio personalities, and other various types of workers, and we gather once a week to play slo pitch. But it’s become so much more than that. In fact, slo pitch has almost become secondary to the relationships we’ve formed outside the foul lines of the ball diamond.
We gather for birthdays, weddings, and holidays. And it’s not just the men that gather. Our wives are just as involved in these functions as well.

We gather together annually for our Valentines bowling night, where we go bowling with our wives and then out for drinks and food afterwards.

Probably our finest tradition is our annual late September trip as a team. We’ve had as few as eight and as many as twelve attend this trip. It started with a simple statement while we were sitting around after a ballgame that we should go to Wrigley field.

Within a couple of weeks, we had the trip organized and it’s been a big part of our ball year. We’ve been to Chicago twice (attending both Cubs and White Sox games), as well as Cleveland, Pittsburgh, Boston, Detroit,
Baltimore and Cincinnati.

Each trip has offered up so many different experiences, including learning about the city we’re in and, of course, watching that particular city’s ball team play. Some experiences have made us laugh (having drinks in the Cheers bar in Boston), while some have provided sobering realities (the Holocaust Memorial Monument in Boston, the decimated Packard Plant and the level of poverty in Detroit). All in all, the trips have been a great sense of enjoyment for all who have attended.

In other words, we’re much more than a group of guys who play ball together. We’re friends who look forward to seeing each other at the ballpark and are left disappointed when someone can’t make it on a given week.

As for the ball, we just completed a three-peat, which made us the first team to accomplish that feat in our league. Overall, we’ve been to the league finals ten of the past eleven years, and won six championships.
We’re a collection of men from all walks of life, and they call us DNS Jeslers!

Pitchers--A great drill for your fundamentals